Prebiotics, probiotics as well as postbiotics for pets; what’s the difference?

Prebiotics, probiotics as well as postbiotics for pets; what’s the difference

While pre- and probiotics have actually been the key additives in the industry of pet food for many years now, the innovation of postbiotics seems to be a game changer in gut health. While it may seem confusing to add a 3rd gut health moderator to the mix, pet owners are much more concerned with boosting their animals’ immune systems than ever before, warranting new technologies in order to improve their pets gastrointestinal (GI) health. With the constant growth of the research in the field of postbiotics, it is safe to say that the newest member of the gut health family is actually here to stay, completing the holy trinity of the microbiome.

Postbiotics are nothing but functional, metabolic by-products of gut fermentation. In other words, you can say that probiotics (i.e., the good bacteria in your gut) digest as well as utilize prebiotics (i.e., bacteria food), and the end result of that interaction is that the release of postbiotics into the gut environment. The name actually says it all: Postbiotics are “biotics” — a.k.a living organisms, which are produced “post,” or after, gut microbe interactions. Postbiotics include compounds like:  Short-chain fatty acids  Enzymes  Vitamins  Microbial cell fractions  Organic acids Moreover, these compounds act in health-promoting ways, several of which have yet to be discovered. In the pet digestive tract, one of the most notable postbiotics are acetate, propionate as well as butyrate. These 3 substances are particularly classified as short-chain fatty acids, which are necessary sources of energy for the probiotic bacteria themselves, as well as for the epithelial cells that make up the gut lining. Short-chain fatty acids are important because they work to optimize motility within the GI tract and reduce inflammation, which is vital for the prevention of any acute or chronic digestive condition. 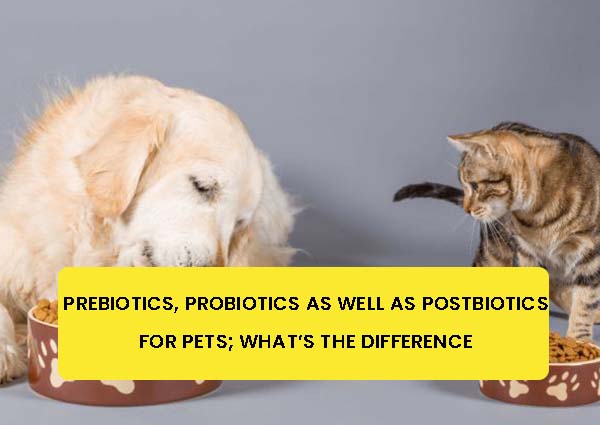 Research continues to actually find that the gut microbiome — in both humans and pets — is more complex than we originally thought. Not only does the GI tract play a major role in virtually every function and system in the body, it also differs between individuals. The microbiome is dynamic and might change dramatically due to:  Diet  Stress level  Age  History of medication use The gut microbiome is almost like an internal fingerprint, which suggests that digestive supplements will impact each animal in slightly varying ways. That being said, several researchs have discovered that the gut microbiomes of dogs and cats are quite similar in composition and makeup; until and unless, of course, the animal is ill. In dogs and cats with digestive disorders, like chronic enteropathy and inflammatory bowel disease, the makeup of the gut microbiome has been shown to be significantly different in both its bacterial diversity as well as richness than the microbiomes of healthy pets. For preventative reasons, probiotics are increasingly included in pet food ingredient lists and have been shown to help in altering the populations of bacteria within the gut, shifting the GI tract from too many pathogenic bacteria to an abundance of really good gut bacteria. While probiotics are beneficial, their use are often controversial since probiotics are living organisms. This further means that, from a technical standpoint, heat, food processing as well as storage limitations all pose significant challenges to the viability and also the stability of probiotics. Prebiotics are really selective ingredients that stimulate the growth of particular bacteria and, as a result, promote gut health. They are broad in scope, but the key here is that prebiotics aren’t alive, so that they are less of a concern in terms of efficacy. To put it simply, probiotics and prebiotics simply focus on altering the composition of the gut microbiome in order to prevent disease, while in case of postbiotics they are used for altering the function of the microbiome for the overall good health of the gut.

Why use postbiotics in dog and cat food?

As research continues, what we know thus far is that postbiotics positively affect signaling pathways within the gastrointestinal tract. As metabolites, they interact with the bacteria within the gut, the gut itself and other body systems to trigger the immune system and promote whole body anti-inflammatory responses. While the exact mechanisms through which postbiotics actually work have yet to be completely revealed, what’s known about them currently is their huge range of immunomodulatory effects, which is good enough reason to incorporate them in pet food.

Postbiotics are heat-stable metabolites that deliver benefits straight to the gastrointestinal tract. All good things happen in threes! Protecting any dog’s or cat’s immune system and overall health is simple with the mix of research-backed probiotics, prebiotics and postbiotics.